I talk to many aspiring leaders that are striving to be happier and more successful at work. Invariably, the discussion will come around to their own leader’s attributes and they’ll begin to share the truth, the whole truth. Comments like, “I really shouldn’t say this” or “He really isn’t that bad”, are shared. They feel bad saying anything, because despite the leader’s handicaps, these great future leaders still feel loyal. Loyal to someone that hasn’t really been there for them. And for every leader that still feels loyal, there’s another that’s just disengaged from their work.

There’s a lot of mediocre leaders out there that aren’t engaging their employees. They don’t know how to give their employees what they really need to do their best. And if they did, they would have stellar employees that would drive the company forward.

So be honest right now. Do you see yourself if any of these?

He puts his head in the sand when things get tough.

Your boss excels in handling tasks daily, but when it comes to navigating people’s emotions, he will avoid the whole situation. He just won’t go there. He knows that there’s rumblings of employees not getting along, but he will hope that it all goes away without his interference. Eventually, things will come to a head when the “problem” grows into a massive issue that has infected the whole team. After months and months of doing nothing, the leader finally acts and expects everything to be solved with this one intervention. However, things have progressed too far for one simple intervention to work. By this point, the relationship issue has affected the team culture.

Now, he has an even bigger problem.

She is inconsistent in her actions

You just never know how your boss is going to act. He could be extremely happy, or he could be agitated beyond belief. By the way, I once was in a meeting with a leader discussing some financial issues. It was pretty mundane facts that were being discussed. Suddenly, she went into a tailspin, that culminated with her jumping up and slamming the door. It was pretty scary stuff that was never fully explained to me. However, my reaction to this incident was never knowing what to expect in the following interactions. I went into each situation, not trusting what would come next. In addition, employees would withhold information because her team was terrified of her possible reaction.

This behavior doesn’t exactly encourage a great working relationship with a young leader.

And the team knows this because the leader shows this to them time and time again. When someone wants the opportunity to move upward in the organization, he doesn’t support the employee.  Your boss will claim that it’s because he’s not ready for the opportunity, but the truth is, he doesn’t want to lose the great worker. He consistently does what’s best for him and his needs, never his employees. He is focused on his own path to reaching his goals. The employees are very clear on this fact which maybe explains the turnover in his department. However, he will find a way to also blame this on his team.

These are extreme examples of leaders that have a lot of growing to do. However, maybe you see a sliver of yourself in one of these scenarios. If so, you have some work to do before you reach your potential. Keep moving forward and strive to become an excellent leader that stands out-for the right reasons. 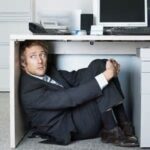